Home > News > Do you know the Paint Roller invented by Canadians?

Do you know the Paint Roller invented by Canadians?

Paint Roller was invented by a man named Norman Blakey in Toronto in 1940. Prior to this, the paint job was done by a professional stucco brush.

Blakey was born in Pierson, Manitoba in 1891 and consulted with a textile expert, Tom Hamilton, in Alberta. In an interview with the Globe and Mail in 1984, Hamilton recalled the scene at the time and said that Blakey asked him what kind of fabrics can have hard fluff on the surface. He asked Blakey what he wanted to do. Blakey said, making paint rollers. Then he further explained his idea, using a "7" shaped handle, and mounted a hairy roller on the transverse head.

"The best fabric I could think of at the time was to cover the green mohair velvet used on railway passenger cars. So I sold him a bundle, told him how to cut, and suggested that he stick it on the roller with glue. Later he came back to thank me for the suggestion and gave me a paint roller he made and a tray made by a blacksmith. None of us at the time thought how important his invention would be. 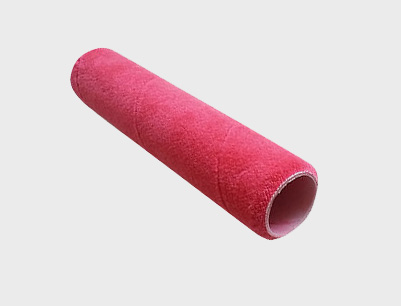 Even if Mr. Blakey himself did not feel that this was a major invention, he might just want to work more efficiently. And he did not look for investment to mass production at that time. Until his death, he never thought of applying for an invention patent to improve his poverty.

As a Mohair Paint Roller Manufacturer, share the differences between paint brushes and roller brushes:

First, the advantages of brushing: new houses need to be renovated, brushing on the wall is very important. Brushing in the bedroom is generally better and more common. Brushing is done using a paint brush. The effect of paint brushing is very good. The key is to save the decoration cost. Moreover, the brush painting tool is simple and convenient to construct, and it is relatively easy for general owners to master the skills.

Disadvantages: However, brushing has its disadvantages; the speed of brushing is slow and labor-intensive. If the operation is not skilled, it will cause uneven coating.

Disadvantages: However, roller brushes are not used by many people because rolling brushes waste paint and increase costs; and some people are not satisfied with the effect of rolling brushes. Rolling walls are prone to pitting, so many people don' t Too much to use this method.

The choice of paint brush and Mohair Paint Roller. Choosing a good tool needs to understand the advantages and disadvantages of the various brushes. Don't use the brush blindly, when the brushing effect is not ideal.

Previous: What is the Selection and Use Method of Paint Roller?
Next: How can walls be better painted?

If you have any questions about our factory or are interested in our products please contact us.

Download a PDF of our latest catalogue or
Contact Us to send your any request.
Copyright © Zhenjiang Cohwabrush Manufacture Co., Ltd. All Rights Reserved
Sitemap|Technical Support: